In 2019, ASEAN NCAP had also crash tested the Mitsubishi Outlander of Plug-in Hybrid Electric Vehicle (PHEV) model. The model was awarded with 5-Star ASEAN NCAP rating with a total score of 86.75 points. Nevertheless, the PHEV model is currently only available in the Indonesia and Philippines market with the model came as a Complete-Build-Up (CBU) unit from Japan. Thus, Mitsubishi has also made the model available in other countries in South East Asia namely Vietnam, Malaysia and Singapore in the non-hybrid model. This is because Vietnam and Malaysia are one of the countries that have Mitsubishi’s assembly plants to produce the vehicle for their respective local markets.

In the current assessment, ASEAN NCAP tested the left-hand drive variant of the seven-seater SUV in which it performed well with the scoring of 45.92 points in the Adult Occupant Protection (AOP), 20.65 points in the Child Occupant Protection (COP) categories and scored 16.96 points for its Safety Assist Technologies (SATs). The model is equipped with standard fitment of dual airbags for both its frontal occupants, Seatbelt Reminder System (SBR) for driver only and Electronic Stability Control (ESC) as standard fitment across all its variants. Furthermore, the non-hybrid SUV also offers other SATs for its variants sold in the Vietnam market comprising Blind Spot Technology (BST), Forward Collision Warning system (FCW), Autonomous Emergency Braking (AEB) for City, Inter-Urban and Pedestrian/Vulnerable Road User (VRU) either as standard of optional fitment.

“ASEAN NCAP is proud that the Mitsubishi Outlander, of the non-hybrid model, achieved 5-Star rating similar to its PHEV model tested in 2019. Thus, we are pleased that Mitsubishi has considered offering options for consumers to choose on the type engine for the SUV without compromising its safety performance. We are delighted to be working together with Mitsubishi and other vehicle manufacturers to elevate the safety performance of vehicles sold in the South East Asian region.”

An overview of the Mitsubishi Outlander result is as follows. 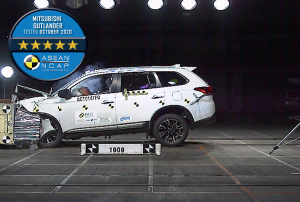