Kajang, Malaysia, 17 October 2020 – The New Car Assessment Programme for Southeast Asian Countries (ASEAN NCAP) today released the results of five models that it recently assessed. Due to the global restrictions imposed due to COVID-19 pandemic ASEAN NCAP drew up a new guideline in which all cars with kerb weight of less than 1400 kg should be crash tested at the Malaysian Institute of Road Safety Research’s (MIROS) crash lab facility, that is MIROS PC3. The five models that ASEAN NCAP assessed during this quarter of 2020 were four Toyota models namely Toyota Hilux, Fortuner, Corolla Cross and INNOVA whilst the fifth model is the Malaysian local car, Proton X50.

The first model that ASEAN NCAP assessed during this quarter was Toyota’s pickup truck, Toyota Hilux. Based on the evidences provided by Toyota which proved the new Hilux has the same structural platform and crashworthiness system as its predecessor tested in 2015, ASEAN NCAP has agreed to extend the 2015 Hilux’s offset deformable barrier (ODB) score for adult occupant protection (AOP) to the assessment on the current model. In addition to this, ASEAN NCAP conducted a collaborative test with Toyota which was done in-house at Toyota’s lab in order to assess the performance of its child occupant protection (COP). The in-house test, comprising both the frontal offset test and the side impact test for COP, were done because the 2015 test used child P-dummies in the assessment whereas the current assessment is using child Q-dummies. Under the current assessment, the new Toyota Hilux performed well with an overall score of 83.42 points in which it was awarded with 5-Star ASEAN NCAP rating. Based on the overall score, the pickup truck obtained 45.74 points for AOP, 22.47 points for COP and 15.21 points for Safety Assist Technologies (SATs). The current Hilux model is equipped with the same safety features as the 2015 model with three airbags, Anti-lock Braking System (ABS) and Seatbelt Reminder System (SBR) for both driver and front passenger as standard across all its variants. Electronic Stability Control (ESC) is available as a standard fitment for the Brunei, Singapore and Vietnam market whilst standard 7 airbags features are offered in Brunei and Vietnam. Other SATs namely Autonomous Emergency Braking (AEB) City, AEB Inter-Urban, Lane Departure Warning System (LDW), Forward Collision Warning System (FCW) and Lane Keep Assist (LKA) are offered either as standard or optional in the Hilux.

The second Toyota model that ASEAN NCAP assessed was the Toyota Fortuner. This is the second assessment that ASEAN NCAP conducted on the SUV in which its first result assessment was announced in 2016 with 5-Star rating extended from the Toyota Hilux’s 2015 results. Thus, for the second assessment this year, ASEAN NCAP has also agreed to extend the new Toyota Hilux’s AOP and COP results assessed under ASEAN NCAP 2017-2020 rating system to the 2020 Toyota Fortuner model. This is based on the technical evidence provided by Toyota that showed the SUV was based on the Hilux’s platform and it has the same crashworthiness restraint system as the pickup truck. As such, the new Fortuner successfully achieved 5-Star rating with a cumulative score from the three assessed categories slightly higher than of Hilux’s at 87.46 points. From this accumulated score, the seven-seater SUV obtained 47.27 points for AOP category, 22.13 points for COP and 18.06 points for SATs. The Fortuner is equipped with three airbags, ESC, ABS and SBR for its frontal occupants as a standard equipment across all its variants. The new SUV also offers vehicle safety technologies either as standard or optional fitment in the available countries that are AEB City, Inter-Urban, LDW, FCW and LKA.

Another Toyota’s model that underwent ASEAN NCAP assessment was the Toyota Corolla Cross. This is the first time ASEAN NCAP is assessing the model of which has made a splendid performance by obtaining an overall score of 88.61 points placing it as 5-Star ASEAN NCAP rating. From this score the Corolla Cross received 45.85 points (AOP), 22.63 points (COP) and 20.14 points (SATs). The tested Corolla Cross was equipped with ESC and SBR for driver and front passenger as a standard fitment across all variants. In addition, a number of vehicle safety technologies are available in the hatchback namely AEB City and Inter-Urban, Blind Spot Technology (BST), LDW, FCW and LKA either as standard or optional in all the available countries in South East Asia. Whilst AEB VRU/Pedestrian is currently only offered in the Thailand market.

Toyota recently launched its latest INNOVA model in South East Asia. The model was first assessed by ASEAN NCAP in 2016 and as such Toyota has provided technical evidence that the new model in 2020 has similar structural design and crashworthiness restraint system as the one that ASEAN NCAP tested in 2016. Therefore, ASEAN NCAP has extended the INNOVA’s 2016 ODB score for AOP to the current model’s assessment. As the previous rating system (2012-2016) used a P-dummy for COP, thus, ASEAN NCAP conducted a collaborative test with Toyota which was done in-house at Toyota’s lab in order to assess the COP performance of the vehicle. The in-house test, comprising both the frontal offset test and the side impact test for COP, were done because the 2016 test used child P-dummies in the assessment whereas the current assessment is using child Q-dummies. For the assessment that ASEAN NCAP recently performed on the new Toyota INNOVA, it had successfully obtained a total score of 82.69 points which entitles it to 5-Star ASEAN NCAP rating. For the AOP category the 7- to 8-seater MPV received 45.90 points, 21.51 points for COP and 15.28 points for SATs. The Toyota INNOVA has three airbags (frontal occupants and knee airbags), ABS and ESC, SBR for driver and front passenger as standard. The model also offers standard seven airbags for certain available markets.

The fifth result is the new Proton X50, the latest SUV of a Malaysia local brand. This model made an impressive performance in the assessment by achieving 5-Star rating with an overall score of 84.26 points with 43.64 points for the AOP category, 21.17 points for COP and 19.44 points for SATs. The tested X50 has four airbags and it is fitted with SBR for both frontal occupants, ABS and ESC as standard across all variants. The SUV will be available in the Malaysia and Thailand market in which it offers BST for both sides of the vehicle as an optional equipment. It also offers all the safety assist technologies that are assessed by ASEAN NCAP either as standard or optional fitment.

“This year is quite a unique year for us in which we began to conduct our new normal of assessment on recently released new cars. This is because due to the COVID-19 pandemic both the ASEAN NCAP inspectors and OEMs representatives based in other South East Asia countries are not allowed to travel across borders to crash lab facilities in order to conduct ASEAN NCAP assessment. Despite the challenge, we are proud on the number of cars that we assessed this quarter have successfully received 5-Star rating. As such we can see that car manufacturers have incorporated all the safety elements that ASEAN NCAP has stipulated in our 2017-2020 protocol. This shows that the NCAP program has made significant impact towards car manufacturers to be proactive in ensuring that the cars they produced are able to achieve 4- to 5-Star ASEAN NCAP rating that can benefit all consumers.”

An overview of the ASEAN NCAP Q4 2020 results are as follows. 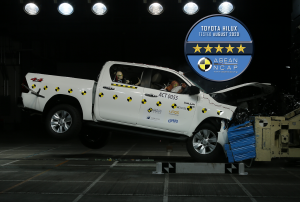 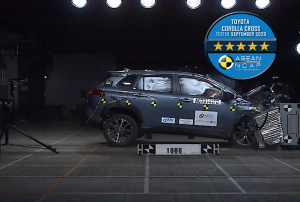 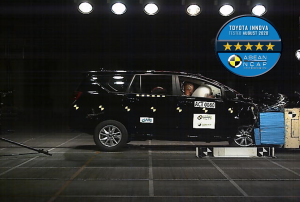 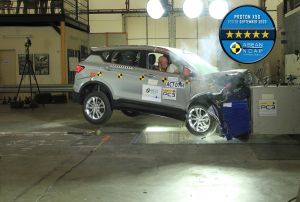