During the ceremony, the New Car Assessment Program for Southeast Asian Countries or ASEAN NCAP was one of the recipients of the prestigious awards, which was presented by the Prince himself, His Royal Highness Prince Michael of Kent. 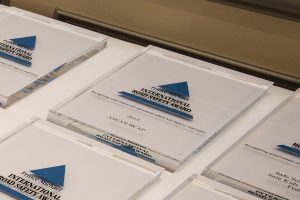 The ceremony was attended by about three hundred of the world’s leading road safety professionals and many former award winners.

The awards recognise achievement and innovation which will improve road safety. They are given to businesses or organisations which have developed initiatives or products that have made an outstanding contribution to the safety of the world’s roads.

“We are pleased and honoured to be recognised as one of the winners for this distinguished award. As an independent body assessing the safety performance of new vehicles in an emerging market like the South East Asian countries, ASEAN NCAP has made notable achievements in the vehicle safety area. One significant impact is that we are able to increase vehicle safety information to the consumers through the assessments that we conducted for new vehicles that are sold in the region. Furthermore, through these assessments, we have successfully amplified the safety level of vehicles sold in the region such as having minimum double airbags as standard, seatbelt reminder systems and also electronic stability control as a standard fitment. This award marks a significant step in our journey towards reducing the high number fatalities due to road crashes in this region.”

“We would like to thank various organisations that have been committed to support ASEAN NCAP work since it was formed in 2011. Other than performing assessments on new vehicles, ASEAN NCAP is also committed to work in areas that enhance the vehicle safety assessment such as positive engagement with relevant stakeholders. One of such engagement has resulted in the Malaysian Government to mandate all vehicles displayed in showrooms or any premises that are targeted for sale to place ASEAN NCAP labels beginning 1st March 2020. I am confident this award will be a driving force for us to continue culminating in the reduction of vehicles with unsatisfactory safety levels in the South East Asia region.”

The recognition of ASEAN NCAP’s achievements is available at http://www.roadsafetyawards.com/aseanncap.

Since 1987, the Prince’s Awards have given public recognition to those who have improved road safety throughout Britain. Now the Prince Michael International Road Safety Awards recognise outstanding achievement and innovation world-wide.

Each year the most outstanding examples of international road safety initiatives are given public recognition through the scheme. All road users, including pedestrians, drivers, cyclists, bikers and horse riders are asked to identify those whose initiatives make our roads safer and nominate them for an award.

The Prince Michael International Road Safety Awards are presented to companies or organisations in recognition of their outstanding contribution to improving road safety. The award categories are based on the five pillars of the Global Plan for a Decade of Action.

The press release can be downloaded here.